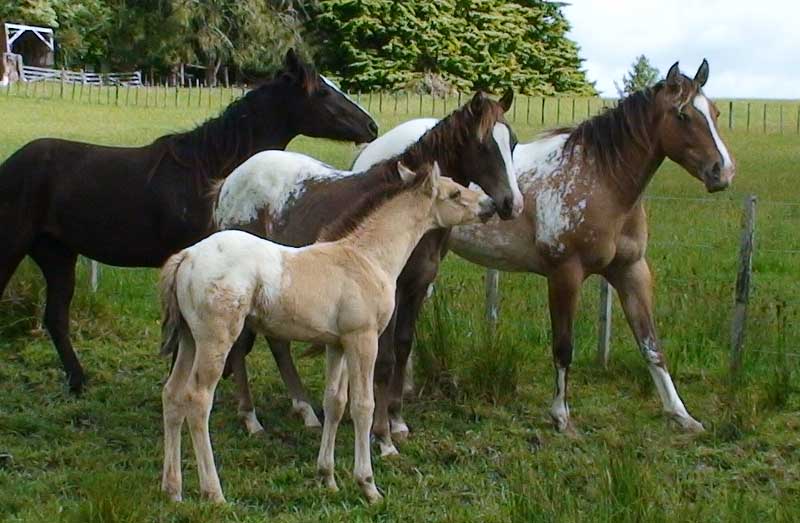 Research published by The Appaloosa Project confirmed something that won’t come as a surprise to everyone - fewspot leopard and snowcap blanket Appaloosas do not see in the dark. Neither do roan-only Appaloosa horses who have 2 copies of LP.

Night blindness is linked directly to horses that are homozygous for (carry two copies of) the dominant form of the “appaloosa” gene, known as LP (short for Leopard Complex).

Horses with two copies of the dominant form of this gene typically do not have pigmented spots but instead have solid white bodies or rumps. However, be mindful of appaloosa roan animals who don't exhibit an obvious coat pattern but may carry 2 copies of the leopard complex gene LP.

Horses with pigmented spots carry only one copy of the dominant form of LP are not affected by night blindness. Take a look at our Keeping the Colour article for a visual guide to these horses.

Most horses have excellent vision at night but vision for the night blind horse begins to fail once it’s dark enough that you’d have trouble reading a book. Beyond that point, they rely on their exceptional spatial memory, other horses, hearing, touch and smell to find their way around.

Horses are finely attuned to their surroundings, so this is far from being a hit and miss approach. An amazing ability to remember where obstacles such as fences and logs are mean that the night blind horse often only needs plenty of daylight in which to explore new surroundings to be totally comfortable in them.

When in unfamiliar surrounds, or when something changes, the horse relies on other senses to find its way around. You’re most likely to see this if you feed a night blind horse in the dark… even with a feed bin placed directly in front of them they’ll need to both smell and feel for its location.

Night blindness is something that these horses are born with, so by and large they are extremely well adapted to their condition. Appaloosa Project researcher Sheila Archer says that most of the owners of the horses that took part in their study were surprised to find that their horses were night blind because they found their way around confidently at night, often at high speeds, never bumping in to anything.

“Over thirty years ago sprint and short distance TB racing was all the craze. The Appaloosa was being especially successful between 400-800 distances, some with more TB influence easily winning up to 1000 metres.

We didn’t want to outcross and chance a solid foal so after a lot of research we decided a fewspot leopard mare was the only way to go to produce a good spotted racehorse by a top TB sire. Using the old Irish formula of always putting the hot on the top of the pedigree to produce the best athletes. Also around that time there were many good Appaloosa stallions to pick and choose from. 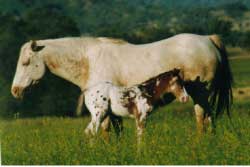 Doing more homework we decided to go for a daughter of Taco Taco (USA) who was producing some very classy types of horses that were blitzing all comers on the racetrack. Not only that, his progeny were winning in the showring with several National titles. Later they proved to be great sporthorses in eventing, dressage and jumping and to this day, this bloodline is sought by those wanting to produce successful sporthorses with size and ability.

Contacting Rebel Stud, the home of Taco Taco, we were thrilled there was one fewspot filly available from an imported mare. So we made the long haul from north Qld down to Ipswich, near Brisbane, fell in love and purchased the filly. On the journey home we had to overnight half way. It was dark when we unloaded and leading the prized filly Rambo to the yards she walked straight into them headfirst! Funny, we thought, she doesn’t seem to be seeing too well in the dark!

Well, this was our introduction to the fact, now scientifically proven, that fewspot leopards are night blind. Realising our filly was blind as a bat at night we asked vets and read up on the subject but little or nothing was available to give us any help. Some literature suggested up to one in sixteen horses of any breed could be night blind but this is totally unproven. We even dosed her with high quantities of Vitamin A to see if that would help but to no avail.

Over several years we studied lots of Appaloosas to see if any others were night blind and came to the conclusion every fewspot and true snowcap blanket horse was but interestingly never found a leopard or spotted blanket to be.”

Few of us have as many horses to observe, over an extended period of time, as large scale Appaloosa breeders, so it’s little wonder it’s taken some time for definitive scientific conclusions to be drawn. 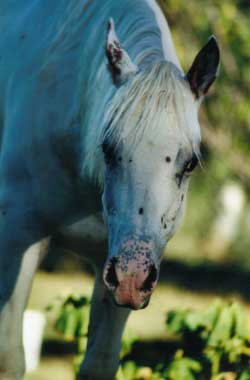 In the last few years, these conclusions have been verified by the Appaloosa Project, a worldwide scientific research effort into Appaloosa colouring. Their published research into nightblindness is available free at www.appaloosaproject.co.

Your thoughtful management of the night blind horse is usually all that’s needed to keep it safe. If changing paddocks, make the change with hours of daylight remaining so the horse has plenty of time to explore and memorise where everything is. Make sure it’s not paddocked with horses that will be aggressive towards it, so there’s little chance of a night time confrontation resulting in a kick or fence accident.

If handling the horse at night, make sure it’s aware of your presence by talking to it, before you touch it. If the ears aren’t pointing towards you, listening for your approach, you need to make more effort to be heard, without causing a fright. When handling and leading, keep some physical contact with the horse so it can feel exactly where you are as well as hear you and be predictable.

An important consideration for the night blind show horse is the maintenance of the whiskers around its eyes and nose. These very sensitive whiskers act as feelers that protect the eyes and nose from damage by warning the horse when it’s nearing a solid object. Without them, the horse may feel the object too late to avoid injury.

The publication of information about night blindness in Appaloosas has some important ramifications for breeders and owners, when it comes time to sell a night blind horse.

Be honest and open about the condition, even if you suspect it might lose you a sale. You have a responsibility to the horse to ensure its new owner knows how to manage it to prevent injury and of course to the buyer to ensure they’re aware of the condition.

Remember, night blindness is a condition that Appaloosas are believed to have existed with for centuries, so it’s one that they adapt to efficiently.

Night blindness is present at birth and doesn’t worsen over time. If your horse is showing signs of deterioration, please have the horse checked out. 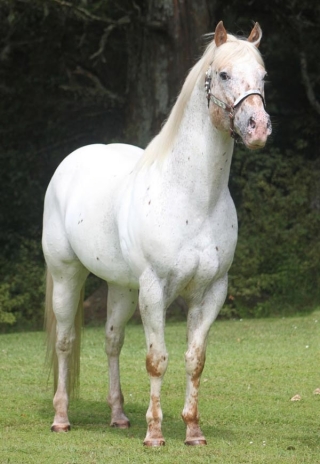